There is a merit of being behind the wheel in the South of France. Flexibility and opportunity to visit places that are not easily accessible by public transport and you can stop whenever you want to. Driving in France can be challenging, especially if you are like us who normally drive on the left hand side of the road. It is hard to prepare for such a change, so just take it easy and try to do what everyone else is doing! Navigation has moved on from bulky maps and the various Apps now available take this distraction away to a point. We used what was available which included Google Maps, Waze and Michelin (the recommended travel map for Southern France), hire cars these days are equipped with smart connectable devices and gadgets, making for the ultimate road trip without getting lost!

Exciting days ahead as our 2 day road trip from Nice to Marseille via the coast was about to commence. We checked out early and luckily the Enterprise Rent-A-Car was just a stone’s throw from our hotel. It was vey straight forward arranging and collecting the car though sadly no Deux Chevaux! However the team there were fabulous, Merci!

First stop Èze. No trip to Nice is complete without visiting the medieval village of Èze, so we quickly detoured our route. It’s only a 12 km drive and we got there in around 20 mins via Rue Flaminius Raiberti then continued on to the M6007 and Avenue du Jardin Exotique. Parking was difficult to find so the best bet is to park out of town and catch a bus. Catch bus #82 or #112 from the Port at the Max Barel bus stop on Boulevard Lech Walensa, just outside the Intermarche Supermarket in Nice.

One of The French Riviera’s most visited attractions! The medieval village of Èze is perched on the mountains between Nice and Monaco, some 427 metres (1,401 ft) above sea level. It’s believed that there have been inhabitants in Èze, since the Neolithic era around 2000 BC. The awe inspiring stone houses, narrow and winding lanes are just a few of what this old world charm place has to offer. By foot is the only means of venturing around, so wear comfortable shoes and clothing, be prepared to negotiate plenty of steps! There are numerous shops, souvenir stores, restaurants and galleries. We only stayed for around an hour but it was enough for us to get a taste of the village, our road trip was calling!

Second stop Carrefour Market. Since we aimed to drive along the coastal road, we joined Promenade des Anglais. Traffic was a little bit overwhelming especially near the airport area, however the stunning beaches we past warranted the slow pace out of Nice. If you need to stock up for essentials, the Carrefour Market along Route de Nice is a good place to stop with plenty of parking, adjacent to the store is L’Atelier des Pains, a perfect place for a coffee and pastry with stunning views of the Mediterranean sea.

Third stop Antibes. The stunning Antibes Marina was an eye opener, moored luxury yachts symbolising the fortune and glory of Antibes. Luckily enough we found a good parking spot opposite the Aire De Jeux Pour Enfants (small playground), from this point you can enjoy the panoramic views. It was also close to the Musée D’archéologie D’Antibes (Archaeological Museum). We walked along the seaside fascinated by painted replicas of Claude Monet and Eugene Boudin interpretations at the Pointe de l’Îlette (Peninsula). There is also a monument in memory of the landing of H.M.S. Unbroken, a submarine under the command of Captain Peter Churchill on April 21st. 1942 which landed saboteurs to aid the war effort. There are plenty of landmarks to visit in Antibes but due to our schedule and parking restrictions, we will have to wait until next time we visit.

The coastal drive via Boulevard du Littoral from Antibes to Cannes is simply breathtaking however it’s slow due to traffic. If you traverse via the motorway with tolls, driving is under 30 mins. But since we want to feel the Mediterranean vibes, we continued with the sea views.

Fourth stop Cannes. Finding where to park was not easy, it was a busy afternoon. Boulevard de la Croisette is the renowned promanade, this where you need to be seen, who knows you might even bump into a celebrity. Although there was an ongoing seaside face-lift at that time, the bars along the sandy beach were packed with plenty of sun seekers. On the other side of the promanade is a line up of exclusive hotels, upmarket boutiques, restaurants and bars. Palais des Festivals is a must visit, this is where the famous Cannes Festival takes place every year. Around this area you can stroll along the sandy beach and admire the luxurious yachts at Port de Cannes, Jetée Albert Edouard.

Fifth stop Calanque de Saint-Barthélemy: From Cannes we continued on D6098 the coastal road where we started to ascend into the red hills, sweeping views over the glistening sea on the left and lush forest surrounding craggy rocks on the right. There are many quaint little villages worth stopping if you have plenty of time, we chose Calanque de Saint-Barthélemy for a quick break and photo stop. It felt so remote, we only saw a few cars on the highway and perhaps wondered if we had strayed too far on this choice of road. There is a beach and small marina nearby that caters for most water relaxation activities.

After a quick break we were back on the road heading to Saint-Raphaël, still on road D599 but deciding to by-pass it instead and continue straight to Saint Tropez. Surprisingly the road was almost empty so no traffic delays and we arrived late afternoon. For a faster journey, you can always join D58 or A8.

Fifth stop St-Tropez: We found a handy parking space smack bang in the middle of town, along Boulevard Vasserot which was a few blocks away from the waterfront. As the sun began to set, lights started to slowly illuminate, it was so peaceful and serene. We walked along the waterfront passing those expensive water craft moored around the Tour Portalet, a 15th-century stone defensive tower. The view here is to behold. On our way back to the car park, we checked out some narrow streets and passageways, doted with boutique stores, restaurants, cafes and cozy hotels. Now subtlety lit with lamp and shop lights giving a magical and mystical feel. You will fall in love with St-Tropez.

We didn’t have the chance to visit St-Topez’s famous beaches as we were back on the road again and time was against us, Toulon was our next destination for the night. To be continued……..

You’ll eventually get used to driving on French roads. This coastal road meanders along the sea and ventures through the middle of towns and quaint villages, just beware of the numerous roundabouts! Finding a parking spot can be a bit hit and miss and is mostly metered, especially nearer the seafronts or centres. Closely check the parking signage which usually shows horodateur or Stationnement payant. Parking cards can be bought from the TABAC chain of shops as an option. Or as we did, buy a ticket from a nearby machine, put in a few Euros and enter your number plate details, voila! A couple of hours up your sleeve to explore. Remember to place the ticket, where paper tickets are issued, face up on the street side of the dashboard so that the inspecteur de stationnement or similar can confirm the timestamp and payment, or you may get fined.

Nothing like looking back on some of the best travel memories! If you love travel stories, tips, inspiration and food you’ll feel right at home here. We love to just aimlessly wander, explore new places, all the beautiful sights and history to behold, meet different culture and most of all, try out new food.

FRESH and satisfying 👍Japanese 🇯🇵 food 👉@izakayasamurai_neutralbay.
IT’S all about 👌👌👌 amazing sashimi 🇯🇵 for dinner tonight!! 👉👉👉 @izakayasamurai_neutralbay.
A coffee ☕️ and knafeh toast 🥯 - sweet cheese 🧀 topped with butter crust is the perfect 👌 cure for the Monday blues 👉 @postcafe2204.
NOODLES 🍝 will certainly brighten up a wet 🌧 and ☔️ miserable day 👉👉👉@haiaulangnuong.
LOOK 😍 at this absolutely gorgeous Japanese 🇯🇵 strawberry shortcake 🍰 @sweetandyummie and @scrumptious_munchies made 😍 for my birthday ❤️.
FOR many years 👉 @marina_lunga Cucina is one of our go-to Italian 🍝 restaurants in Balmain. So glad it has 👍opened a branch in the 😃 Inner West (Marrickville). Food here is always savoury ♨️ and flavoursome, will transport your 🥘 palate in the heart Italy. Buon appetito 😋

BOODLE FEAST! Have you tried this yet? 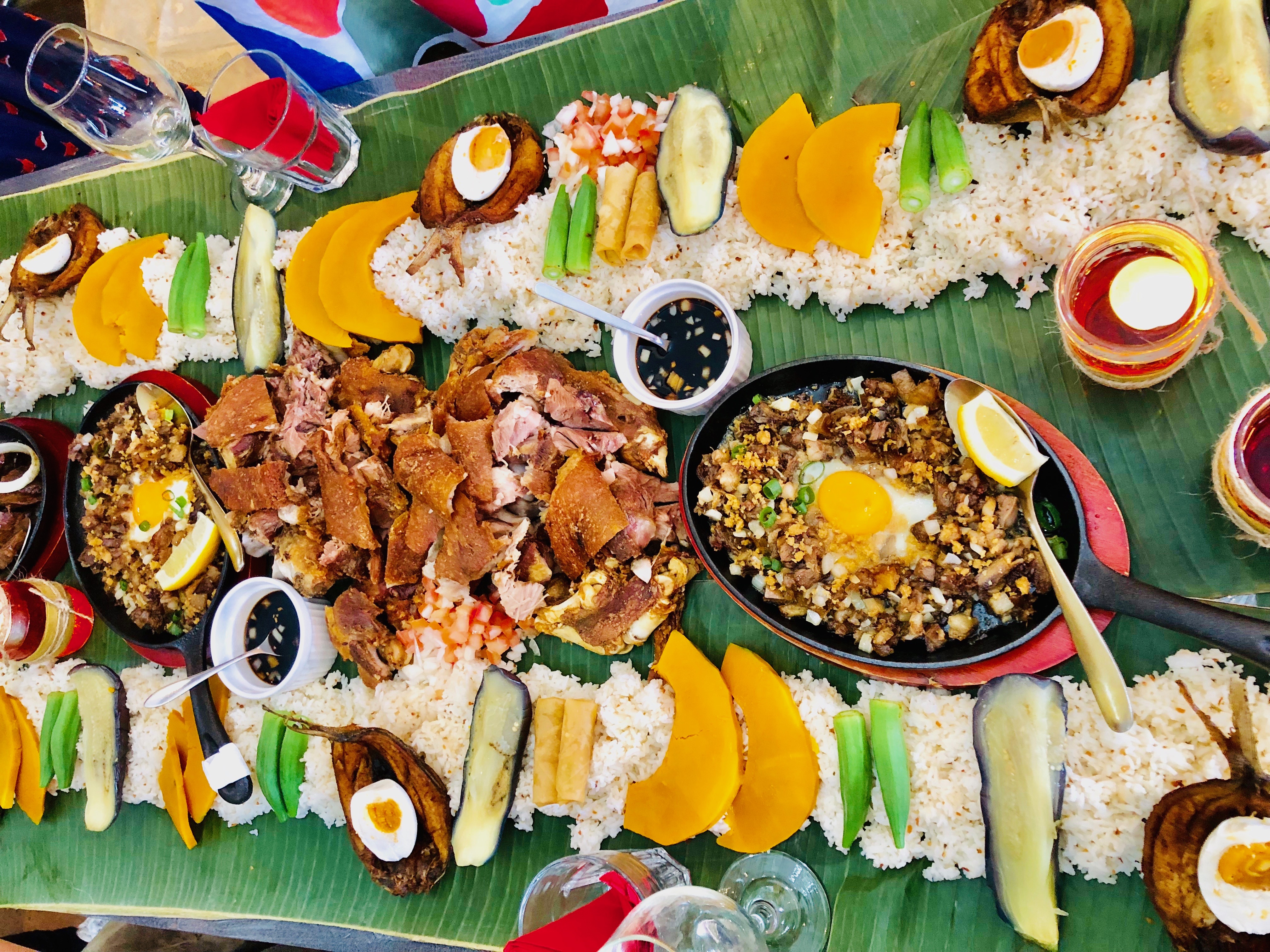