It’s already November but our Oktoberfest memories seem to linger forever. Oktoberfest Weisn was a dream come true for myself and Steve, our love of the hoppy drink has taken us this year exploring several countries like Japan, Philippines, Belgium, Ireland, United Kingdom and culminating in the mighty Octoberfest in Munich, Germany, in the quest of the best beers. Our journey wasn’t that easy, we had a few hit and misses along the way but it was all worth it.

Oktoberfest is celebrated around the world and for us it began in Hamburg on the second week of the festival in the trendy shopping district of Spitalerstraße. There were a few pop up bars set up in the middle of the street including a live band to make up the spirit of the festivity. The first thing we learned about this festival is when you order a beer, you are required to put a deposit for the 1 litre mug which is refunded back when you return it.

After two nights in Hamburg we left for Munich travelling on a 5 hour ICE train, already we can feel the spirit of the festival with a growing number of passengers boarding in their costume. München Hauptbahnhof (Munich Central Station) was chaotic with passengers arriving in large numbers from all different parts of Europe and indeed, the world. It was a relief that the Tourist info counter was not that busy and we got all our transport tickets and mapping all sorted out.

Inside one of the tents

Making that big decision to wear or not to wear a complete Octoberfest costume is a challenge, but the reality is you don’t have to. But if you want to blend in with the crowd, a checkered shirt, ‘Lederhosen’ leather pants, trachten socks and shoes for men and for the ladies, ‘Dirndl’ consist of a blouse, tight bodice, full skirt and apron. Eventually, we decided to wear our checked patterned shirts paired with jeans, which fitted in quite well, red and blue are the staple colours, but other hues were also in abundance. The full tailored outfit is not a cheap buy, with jackets alone running into the hundreds of Euros in many of the boutique outfitters in and around town.

Our hotel was half way by U-Bahn train between the city and Theresienwiese, the venue of the Octoberfest. As you alight the train, you follow the masses of people making their way to the venue. Then you will arrive at the main gate with security checks, a huge police presence and all main roads blocked off. Large bags are not allowed in the venue but you can deposit them at a designated building for 7€.

Inside the venue, you’ll find different tents with different themes, some are colossal, others are smaller tents. Depending on the time of day you arrive, most tents at night are packed but still free to enter for browsing or if you get lucky a table might be just available for you to occupy. Tables can be booked in advance especially if you are in a large group and intending to party at the popular tents. If there are vacant tables and chairs, the protocol is just sit down and wait for the beer server to come to you. Bringing cash is most important, we didn’t see any credit or debit card payment facilities. The servers carry a money pouch, with a handy reckoner to show you the cost, and you will make the payment after being served. You can order your food too from the service staff. Take note, a tip to the server will go a long way! Outside the tents you’ll find areas of long wooden benches in the outdoor beer gardens, again just sit down and wait for the staff to take your order, it is quite a sight to see the servers carrying some eight steins at once, considering it’s a feat in itself just to lift one single handedly to the lips! 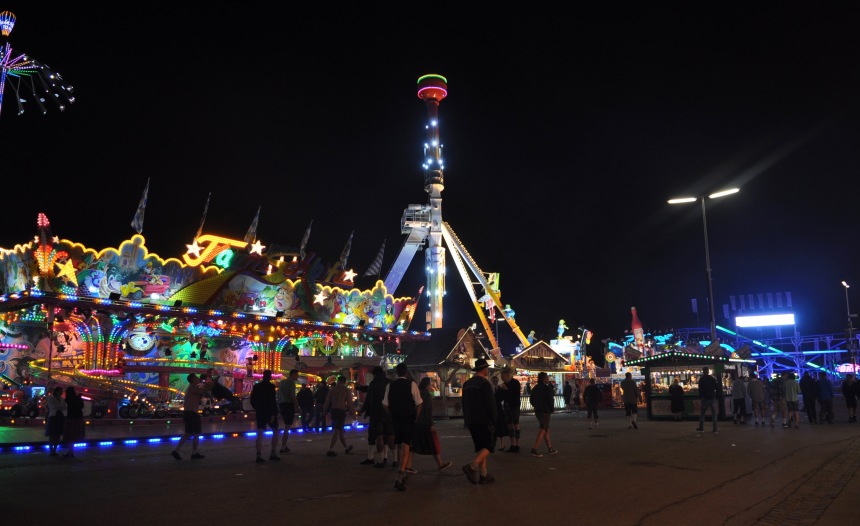 Apart from drinking beer, the festivities include eating, dancing, singing – “En Prosit de Gemütlichkeit”- a toast to cheer and good times is a popular one and of course all the favourite tunes. The venue is also a fairground catering for all ages, adrenaline pumping rides from gentle to spooky, scary and gut wrenching along with amazing displays from neon lights, fireworks, candy bars, food stalls, shooting galleries and souvenir shops.

One of the many food stalls

We missed the Grand Parade which is held on the opening of the festival. This is a must see with colourful floats and costumes, well that gives us a reason to go back.

Overall, we had a terrific time, we loved the electrifying atmosphere and intensity, alcohol obviously is part of the festival but for the two consecutive nights that we were there, we didn’t see any arrests, however, we found it best to get to the park late afternoon or early evening. People drinking all day, and by days end, many were way past the merry stage, having drunk themselves into oblivion, which is not a pretty sight, anyway, Prost to that!

Nothing like looking back on some of the best travel memories! If you love travel stories, tips, inspiration and food you’ll feel right at home here. We love to just aimlessly wander, explore new places, all the beautiful sights and history to behold, meet different culture and most of all, try out new food.

BEST 💪🏻 weekend fuel! Homemade 💥 poke bowl.
THE perfect 👍 end to a 👉 perfect day, fish 🐠 and chips 🍟 @ Earlwood Seafood, Clarke St Earlwood.
SWEET, sour, hot 🌶 and spicy!
HOMEMADE Tuna tataki 👌 キハダ鮪のたたき! If you're 👉looking for a simple and delicious tuna 👊 dish, check this out.
Throwback @bakedbykeiran! One ☝️ of my go-to 👉 cake shops in the Inner West suburbs of Sydney!
IT could be 😃 lockdown cravings but had these 👉 juicy and loaded burgers🍔 and fries @the.tinhorn. Woohoo 🙌

BOODLE FEAST! Have you tried this yet?